In the nineteenth century, sunlight held a prominent position in photography, and it became a favourite subject for numerous commentators and authors. For instance, Daguerre bragged of having “forced the sun to take pictures [for him],”1 Francis Wey published a history of the invention of the daguerreotype titled Comment le soleil est devenu peintre (How the Sun has Become a Painter), and Baudelaire, in Le public moderne de la photographie, went so far as to discuss, not without scorn, photographers who adored the sun. But what about clouds? Clouds block the sun, are difficult to capture in images; were they doomed to become photographers’ archenemy? Were they to remain the bailiwick of painters, who had made them a subject of romantic projection? Nevertheless, scientists – such as Frenchman Jean-Baptiste de Lamarck and Briton Luke Howard – had set out to invent a system to categorize clouds in the very early nineteenth century. Clouds were like everything photographed in the nineteenth century: not satisfied with letting time (that it made or that passed) disappear, photographers tried to capture and classify it.

We can thus say of these temporally related histories of the classification of clouds and the invention of photography that they testify to an accepted and satiated desire for order and for capture of the fugitive, the fleeting, the furtive. These histories meet again in Denis Farley’s Espaces aériens series, begun five years ago and to be presented in exhibitions at Plein Sud and Expression in early 2018. Clouds have appeared in a number of Farley’s works in recent years. In 1995, in a working document for the series Camera obscura, they were reflected in a satellite dish used as a receptacle for light. In a photograph in Paysages étalonnés, taken in the Prairies in 2001 and now in the collection of the Montreal Museum of Fine Arts, round-edged clouds contrast with the severe line of the horizon defining the bottom third of the image.

Espaces aériens marks a turning point in Farley’s aesthetic, developed since the 1980s, of working mainly in documentation of landscape and architecture. In this series, he gradually abandons horizontal composition and aims his lens upward, letting layers of clouds dictate the composition and perturb the unified reading. By this very fact, Farley leaves linear perspective and the related conventions of representation to turn toward an exploratory atmospheric perspective, which imposes new framings. The crowns of trees, the only reference to the earthbound in many of the images, act as a dark lace that cuts into the bottom of the picture. Some of the photographs are almost square, presenting the clouds as coherent, independent units. Sometimes the view is panoramic, stretching wide and sweeping the sky. At other times, the panorama is suggested but broken up, the images shown in sequences of four rather than together. This seriality allows us to imagine the movement of the sky, the time that passes, and also reminds us of the absolute fixity of the medium. In Espaces aériens, clouds are always the central subject of the composition, representing an obsessive quest for natural phenomena, in what the artist qualifies as an urgent need to simplify his approach.

As the history of photography has been interwoven into Farley’s work since he began, it is not surprising to find correspondences between his work and nineteenth- and twentieth-century photographic projects. This series is not without recalling Alfred Stieglitz’s series Equivalents, a milestone of twentieth-century modernist photography. For Stieglitz, as for Farley, the shooting of clouds corresponded to a moment when the human subject disappeared from the representation. As an introduction to Equivalents, Stieglitz takes offence to a remark by Waldo Frank on his photographic work.2 In an article, Frank commented that the power of Stieglitz’s photographs resided in his hypnotic effect on his portrait subjects. Insulted that Frank had nothing to say about his street scenes, interiors, and landscapes, Stieglitz was spurred to return to the clouds, an obsession of his (“I always watched clouds, studied them,”3 he freely admitted). Similarly, Farley, after having used his own body as a unit of movement in the series Paysages étalonnés and Irradiations, and having featured the human face in Déplacements, leaves himself as reference behind and turns his own gaze upward. The cloud, though an everyday vision, is difficult to capture, and thus is also understood as proof of Farley’s photographic talent, and as an opportunity for him to look back on his practice after developing a particular aesthetic.

Comprising pictures taken in Canada and elsewhere, Farley’s series offers a subjective catalogue of scads of clouds. However, the displacement indicated in the titles is not immediately observable in the images, which are striking for their stylistic coherence and thematic unity. As Stieglitz said, “Through clouds to put down my philosophy of life – to show that my photographs were not due to subject matter – not to special trees, or faces, or interiors, to special privileges – clouds were there for everyone – no tax as yet on them – free.”4 Here, the parallels between Stieglitz and Farley are even more striking: the cloud acts as a liberating subject, a way to unshackle oneself from “what is material and coveted.”5 There is also something unifying in clouds, accentuated by the seriality of Farley’s images (within a single piece or one image after another): they pay no attention to geographic location. They appear everywhere.

Inserted at the end of this collection of clouds is Network, Technopark, Kanata (2016), a partial solarization of a cellphone antenna rising in the centre of a plain, crossed by lines of clouds at the bottom of the tower. Close to the top of the tower, a cloud seems to emanate from the dishes, as if the radio waves had suddenly materialized. Also closing the series is Network, Samsung (2016), a digitized image of a cracked Samsung smartphone screen, the spider web of fissures bespeaking the complexity of networks that traverse it fleetingly to make it function.

The addition of these two images as an aside to Espaces aériens reminds us that the cloud unites us all, an indicator of our networked life. It is impossible not to think of the dematerialization of computer servers and of cloud computing, which is becoming more popular among both individuals and businesses. This new version of the cloud is resolutely technological and completely current; in fact, Montreal, where a number of companies have invested in cloud computing, is ramping up to become the seventh Google Cloud region. The Espaces aériens series may thus be apprehended as a moment of transition between photography of the cloud and photography as cloud.

Espaces aériens fits within Farley’s general tendency to portray communications tools that have come to mark the landscape – unavoidable and revealing objects: cellphone antennas, satellite dishes, nests of cables connected to the backs of servers. Storage of photographic information, circulation of content on social media and sharing platforms, and dematerialization of representations – the cloud, translucent, intangible, floating, becomes a convincing metaphor for today’s experience of photography itself. If photography long depended on the sun to exist, it now clings to clouds.
Translated by Käthe Roth

Daniel Fiset is an art historian, educator, and curator. Currently a doctoral student in art history at the Université de Montréal, he is conducting research on the connections between contemporary art photography and amateur practices in the digital age, as well as photography as a technological practice.

Denis Farley lives and works in Montreal, where he earned an MFA at Concordia University in 1984. His work has been shown in Canada, the United States, and Europe. He is represented in a number of public and private collections, including the Musée d’Art Contemporain de Montréal, the Canadian Museum of Contemporary Photography, the Montreal Museum of Fine Arts, the Musée National des beaux-arts du Québec, the Musée de la Photographie de Charleroi, and the Fonds National d’Art Contemporain in Paris.
denisfarleyart.com 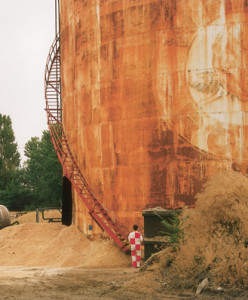 [Spring 1999] This article was originally published only in French. You can read it by switching over to the French version of this page. 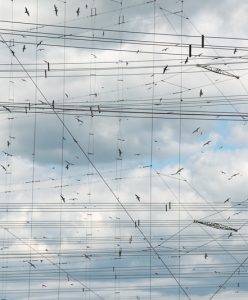 February 26, 2020 [originally published in CV104 in Fall 2016] — Robert Bean’s photographs in the series Études (for Marconi), though seemingly straightforward in content, continue the artist’s investigations of obsolescence, its myriad relationships with and the surprisingly malleable notions of past, present, and future, and their outcomes… 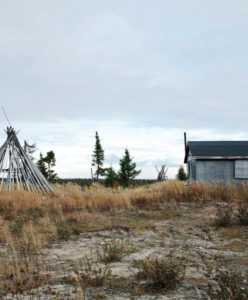 October 30, 2017 [originally published in French in CV92 in Fall 2012] — Thomas Kneubühler’s Under Currents takes us through the hydroelectric installations at James Bay and the complex network of exchanges between North and South that their construction has established. What is initially striking in this coherent whole is the rigorous organization of various elements in a series of groupings to form a well-marked path that is constructed bit by bit, in successive layers, with each of the carefully defined and delimited components opening new perspectives and adding a stratum of meaning to the plural discourse that has been set in motion. [Summer 2019] This article was originally published only in French. You can read it by switching over to the French version of this page. Travaux récents/Recent Work La Castiglione, Montréal Du 14 novembre au 15 décembre 2018 By Fanny Bieth (French only) [See the printed or digital version of the magazine for the complete article. […] 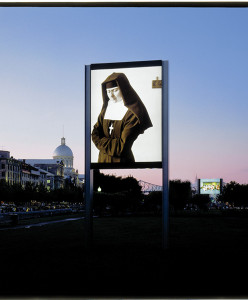 [Summer 2009] by Jacques Doyon For several decades, contemporary art has been on display in the public spaces of Quebec’s urban areas, thanks to the creation of public art programs. Photography was long excluded from these programs, and even today it has limited visibility. Some initiatives have been undertaken in recent years, however, that stand […] 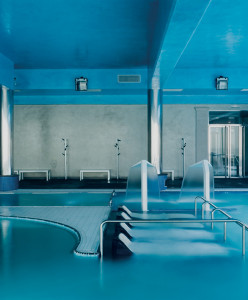 [Summer 2007] Parisian Laundry, Montréal January 12 – February 24, 2007 This welcome, timely, and provocative exhibition of photographic works by Lynne Cohen and Denis Farley shed considerable light on their respective oeuvres in a truly dialogical fashion. Lynne Cohen’s photographs have never looked more seductive and unsettling than they do in the present exhibition. […]