The works brought together in this issue look back at significant phenomena and events in recent history to bring them back to memory and assess their current relevance. These are prolific works, with multiple iterations, that take forms as complex as their subjects: an entire field of artistic practices, pioneering works and pivotal moments, and the multiplication of cultural artefacts that are subject to intense ideological manipulations.

For fifteen years, Blake Fitzpatrick and Vid Ingelevics have been collaborating on a project, Freedom Rocks: The Everyday Life of the Berlin Wall, through which they follow what has happened to various fragments of the Berlin Wall after its dismantlement. Two sections of the project were recently presented in Toronto. The first accentuated the extreme mobility of these artefacts; the second uncovered the ideological thrust of the commemoration for which they are vectors.
with an essay by Jill Glessing

Recent exhibitions and publications on Expo 67 have uncovered the memory of Charles Gagnon’s exhibition in the Christian Pavilion as well as his film The Eighth Day, a montage of images from current events offering a searing critique of war technologies, violence, and postwar consumer society. Fifty years later, Emmanuelle Léonard revisited Gagnon’s film in a video installation showing today’s realities of war through images from the Internet.
with an essay by Pierre Dessureault

For twenty years, Carol Sawyer has been creating works portraying the life of an imagined artist and her encounters with a dense community of women active in the European avant-gardes of the 1920s and 1930s and in modern-art circles in Canada. Through fictional self-portraits and reprises of works, Sawyer helps to restore the legitimacy and recognition of these women’s contribution to art history.
with an essay by Ariane Noël de Tilly

[Spring-Summer 2018] By Ariane Noël de Tilly [Excerpt] For twenty years, Vancouver artist Carol Sawyer has constructed a speculative history around her character Natalie Brettschneider, through whom she has introduced the art practices of a number of previously overlooked artists who developed within alternative circles. Sawyer’s initiative, unique and imbued with humour, was born in […]

[Spring-Summer 2018] By Pierre Dessureault [Excerpt] At Expo 67, a huge celebration of human progress and great festival of the image in all of its technological and expressive possibilities, the Christian Pavilion designed by Charles Gagnon offered a counterpoint to the event’s sea of triumphant optimism. This small pavilion, conceived by its designer as a […] 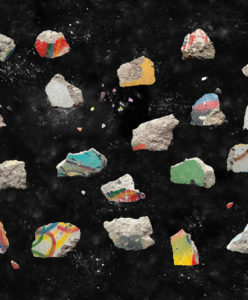 [Spring-Summer 2018] By Jill Glessing [Excerpt] Movement is elemental to existence. Since we made our slow crawl from sea to land we’ve been “on the road” seeking better environments. But another force – territorialism – counters that drive and stems our free flow with walls, great and small. Modernity brought increasing privatization of space through […]