This issue is about our ways of apprehending, representing, and acting in the contemporary city. The works presented here are all characterized by the inclusion within the images of a multiplicity of points of view and a distinct process of observation. They examine different aspects of an urbanity that is being fundamentally transformed.

Certain issues in the making of the city and its impact on our behaviours are portrayed here in unique ways. Prospectus, by SYN– atelier d’exploration urbaine, proposes the underground city of Montreal as a “hyperbuilding”: a fusion of building and city, along the lines of utopian “building-city” projects that marked the twentieth century. Formed into a squad, the members of the group experience possible behaviours in these spaces through a series of carefully documented actions. The entire range of gestures linked to the consumption of goods or cultural products, transit, rest, and observation, file by, disrupted only by a few scenes – related notably to playful behaviours – that appear more incongruous. The public dimension of this “indoor city,” which resembles a commercial and cultural mega-complex combining access to office buildings and the Métro, thus comes into play: a free space to occupy, to claim. SYN– poses this question directly to users by integrating some 1,500 images of its members’ actions, broadcast in loops, on a series of video monitors in one of the corridors of the site of their exploration.

The series of photographic montages by Pierre Granche was produced in 1997, not long before his death. The figure of a flâneur, bearing a mirror on his back, serves as our guide through the architectural density of Prague. The mirror is a recurring motif in the series. All at once a visual tool, a simple reflection in a window, and a utilitarian element in the city, it becomes the pivot in a play on reflections and openings that multiply and combine points of view. Everything in this work is about seeing: various solutions of windows piercing an architectural mass, skylights, long perspectives on a train station or a road snaking between windowless walls. Sight is extended even further by the combining of images, which merges modern and ancient, functional and ornamental, thus offering an opening into the spatial, architectonic, and temporal density of the city.

Cam Work, by Cheryl Sourkes, addresses the urban reality through cameras transmitting live on the Internet. These cameras, usually employed for surveillance, convey a fundamentally repetitive and boring vision of the city and of behaviours. Sourkes has established a sort of typology of these: tourist sites, workplaces, transportation networks, places of rituals, and so on. These images, presented in series, tend to demonstrate a progressive lack of differentiation of lived experience on a planetary scale. Other series, however, disrupt this monotony. Interference, for instance, inserts awareness of the camera by presenting a series of images altered by obstacles or incidents, while in Convenience Cams Sourkes disrupts the realism of these images by inviting a friend to enter the field of the surveillance camera. These works make manifest the growing presence in public places of an omnipresent gaze that exerts a latent control over our lives and, in concert with the phenomenon of reality television, favours an interiorization of models of normalcy.

This text is reproduced with the author’s permission.© Jacques Doyon. 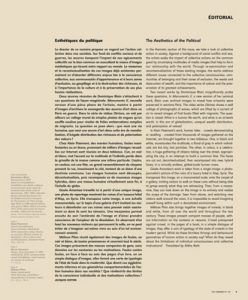 [Winter 2020] In the thematic section of this issue, we take a look at collective action in society. Against a background of social conflict and war, the artists evoke the impact of collective actions on the common good by scrutinizing multitudes of media images that help to form our relationship with the world. Through re-examination […] 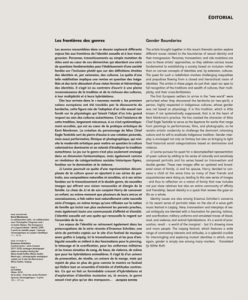 [Fall 2019] By Jacques Doyon The artists brought together in this issue’s thematic section explore diﬀerent issues related to the boundaries of sexual identity and their transgression. Personas, transvestism, and role mutations are core to these artists’ approaches, as they address various issues fundamental to establishing a society based on inclusion rather than on narrow […] 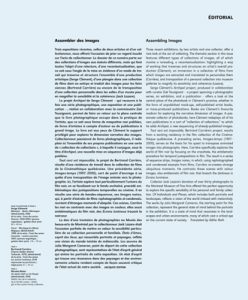 [Summer 2019] By Jacques Doyon Three recent exhibitions, by two artists and one collector, oﬀer a rare look at the act of collecting. The thematic section in this issue features diﬀerent types of collections of images, all of which involve a rereading, a recontextualization: highlighting a way of working that traverses and structures an artist’s […]