The word “harrowing” readily pops to mind when viewing Donigan Cumming’s work. This word has broad, stock associations with both individual and empathic suffering: a lengthy battle with an illness, one’s experience nursing a friend through an illness, and, perhaps most oddly, an affecting, sobering movie about illness can all be described as harrowing. Cumming’s art, an aggressive, unabashed account of those who are forced to bear their mortality openly and awkwardly – namely, the ageing, the sick, and the addicted, many of whom the artist knows intimately – is a fine example of all three intents. But “harrowing” is, of course, also etymologically linked to Catholic dogma, to the idea of the harrowing of hell, when Christ, between his crucifixion and resurrection, makes an infernal descent in order to gather sinners and bring them heavenward. Cumming matches this intent as well, for he seemingly wants to offer redemption to his subjects as well as himself, not necessarily through spiritual or emotional valorization, but through the apparatus itself, which acts as a platform, a stage, on which some kind of glory can be bestowed via a combination of ridiculous histrionics and genuine contrition.

During the tenure of Cumming’s Moving Pictures show at Toronto’s Museum of Contemporary Canadian Art, many resisted this schema. Indeed, even though there is now a distinct niche in the photographic canon for the depiction of the abject (Diane Arbus, Shelby Lee Adams, and Richard Billingham come to mind), our vulnerability in the face of it seems somehow perennial: Can we still bear to look at these aberrations? Can we muster up the same courage as the photographer, who had the gall to look first? We feel dared, morally besieged: the work is exploitative, voyeuristic, manipulative, misanthropic.

We are welcomed to the exhibit with Lying Quiet (2005), an assemblage of 119 inkjet prints that introduces Cumming’s vast collection of characters, many of whom are visible only through body parts or non-physical detritus. The scale of the work requires peering, and returns flatly repugnant glimpses of suffering and decay: faces with eyes either violently closed or open, split crotches, raw orifices, a grotesquely infected and overgrown toenail. Cumming’s view of human rot here is unflinching, near-microscopic, and dumbfounding (one image is of a barely literate note that reads “DON CAL HE SAY TO CAL HIM BACK”; language is hardly current in the shadow of these fantastic specimens).

An ensuing, larger piece entitled Prologue/Epilogue (2005), effectively a diptych composed of photographs and encaustic on two substantial wood panels, starts Cumming’s diligent, conflicted myth making. As in Lying Quiet, the subjects appear in a collage: here, Dante and perhaps The Ghent Altarpiece are the grand, art-historical reference points. Prologue is the Inferno, then, the encaustic forming stalactite-looking shapes over a vista of parched earth, where a sea of cut-out heads are surrounded by limbs. In Epilogue, there is a concerted reconstitution; figures become sanctified with Byzantine-style halos, and are in colour (Prologue only shows them in black and white). The piece’s enduring image is what looks to be a procession of lost souls awaiting entry into a glorious afterlife.

Other, much less valedictory video and photographic works are more attentive to the construction – and potential hollowness – of the pathos going on here: a quartet of inkjet vinyl prints, for instance, nude, black-and-white shots of Cumming’s long-time model Gerald Harvey, show an unsightly piece of flesh (it’s hairy and meaty – not unlike John Coplans’s, actually). Again, an instinctive reaction arises: one wants to wince or gasp, perhaps to emote (Harvey could be ashamed, downtrodden, and he is lit in a saintly way, from the side). But there is also a ludicrousness present: Harvey is clearly posed, and seems both aware of and uncomfortable with this. It’s as if Cumming has tried to pass a devil for an angel, but forgot to cover his horns.

This text is reproduced with the author’s permission. © David Balzer. 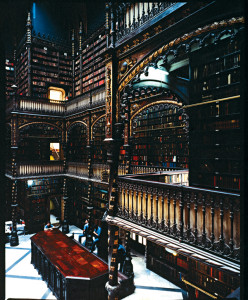 [Fall 2005] Venice, Italy June 12 – November 6, 2005 The cutting edge of today’s art ought to be the stuff of tomorrow, or so the contemporary belief goes. A visit to the fifty-first edition of the Venice Biennale highlights the importance and complexity of the relationship between the two elements of this belief: time […] 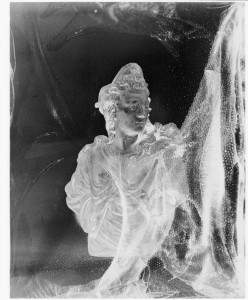 [Fall 2005] Prefix Institute of Contemporary Art, Toronto May 5–June 11, 2005 Photographer and curator Vid Ingelevics is becoming known for his smart and poetic exhibitions. His installations often form wonderful intertexts, implicitly exploring the complex relationship between photography, its institutions of collection and dissemination, and the production and retention of knowledge. On its surface, […] 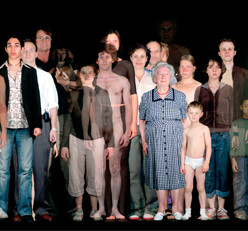 [Fall 2005] This article was originally published only in French. You can read it by switching over to the French version of this page. Musée des beaux-arts de Montréal du 7 avril au 14 août 2005