My father, like many in his generation,1 was a big fan of family photographs. Anything and everything was an excuse to take “slides,” as he called them. We were living in Quebec City, and, aside from the pictures taken at Christmas and on summer trips to Maine, he amassed good documentation of the Quebec City Carnaval in the late 1950s and early 1960s. The 40 and some carrousels of slides are now at my home. What can I do? Of course, it goes without saying that they need to be digitized. But according to good preservation practice, this would not relieve me of the responsibility of preserving the originals in an appropriate vault. And digitization itself is not without raising a few issues: digitizing in which format, with which codec algorithm? Or, if I forgo compression, as is recommended, which image-storage medium do I use – and this raises the question of the need for disk space for processing and storage of large files. There no doubt would be a need for some sort of database so that the images could be retrieved. How do I plan for technological obsolescence – changes to formats, codecs, operating systems, equipment, software? On the scale of my project, it would be possible to answer the most pressing of these questions and it would cost me time, certain effort, and money as a consequence. Extrapolating, one can easily imagine the problems and the costs that large collections – archives or film libraries – must assume.

As the recent evolution of digital technologies constantly reminds us, our world is becoming more and more evanescent, unstable, variable, and fluctuating with regard to conservation and preservation of the digital heritage that is being created and, more particularly, of artworks with technological components. We are just beginning to understand the scope of this trend, which is sweeping away many of our presuppositions with regard to the authenticity, provenance, and historical cost of artworks. Of course, this questioning of the values of stability of the artwork has been around for a long time in photography, cinema, and video. But now, production of film is about to stop or become very expensive, and although we can still find videotape, the coding of images and sounds is now completely digital. Thus, we are coming to the time when what we can call the content of media and the technological means are independent of each other; in this sense, digitization will soon uncouple the analog image from all referents. Once an image is digitized, every aspect of its recording is calculated and infinitely modifiable.

Documentation and Material Conservation Given the Performativity of Works
We are experiencing a change of paradigm that throws into question our desire for stability and permanence. In the art world, the vitality of a notion such as that of the aura, served up full throttle, reminds us that we still cling to the values of originality and origin attached to an object, sculpture or painting, that we want to preserve as is. Thus, we turn to passive conservation strategies such as storage, environmental control, and scientifically controlled amounts of light to minimize damage. The ideal would be to freeze the object in time and stop its physical deterioration. Yet this utopian notion runs counter, notably, to the value of use of the work; Benjamin noted this opposition between the cult value of a work and the use value of its reproduction. But the desire for immutability of the art object is, it turns out, illusory. The evolution in restoration practices with regard to the authenticity of the work has led to increasing concern with its context, which brings together the documents, the work, and the artist.

With the trend being maintained – with the production of artworks by technological means promising to continue if not intensify – conservation will reside more and more in such documentation and in computerized documentation systems, as well as in strategies of material conservation – that is, in the planning for obsolescence of technologies. For I do not much believe in “all-encompassing” miracle solutions when it comes to the preservation of technological artworks. Artworks are too often unique or diverse, variable, and composite. A case-by-case approach is thus required in the current state of affairs. Certain research projects are advancing thought on the issues and challenges of the conservation of works with technological components; one may consult, notably, the Web sites of DOCAM and the Variable Media Network.2 The latter has written a questionnaire to be administered to artists to find out about certain parameters of their work – not so much its optimum fixity but the degree of variability of its components (visible elements, monitors, screens, various equipment) and the relative importance of the work’s “behaviours” (interactivity, networking, etc.).

A number of academic researchers in art history are entering the rich field of research composed of performance and its history. The performative is becoming a broad category for discussion of certain contemporary-art practices: the procedural aspect, the temporal conducting and re-conducting of the work, the definition of the space by technical mechanisms affecting how it is received and making it mobile, active, participatory, interactive – in short, the variability in time according to the degree of involvement of the participants, players, or spectators. Given these performative aspects, how can a work be fixed or its authenticity captured? How can the successive states of such works be preserved? What can be done when the artist’s intention does not guarantee authenticity and authenticity does not reside in any subject?

Container, Content, and Context
In 1951, Suzanne Briet caused a sensation in the world of documentation, which was still reeling from the shock of information science in theoretical thought. In her forty-eight-page booklet called Qu’est-ce que la documentation?3 Briet introduced the idea of the document as the aggregate of discourses related to the use of documents, and the idea that the latter are social constructions. She referred to the traditional definition of the document as the embodiment of proof, as evidence, and extended it to include concrete objects, clues, or symbols preserved or conserved with the goal of representing, reconstructing, or proving a physical or intellectual phenomenon. The indicial nature of the document means that it becomes part of a network and points toward something else, especially toward other documents; at the extreme, the system of referrals and indexations has no goal beyond the way in which users employ it.

In today’s information science, the notions of “container,” “content,” and “context”4 have become metaphors to articulate the fate of the document in the era of digitization, databases, and networks. This distinction proves useful in the field of digital information-management systems, for it allows humanly decipherable content (text, sound, and image) to be independent from storage methods and media. Thus, the content remains unchanged, which is what is sought, even if the container may have been modified.

As the recent evolution of digital technologies constantly reminds us, our world is becoming more and more evanescent, unstable, variable, and fluctuating with regard to conservation and preservation of the digital heritage.

What is certainly valid for digital documents is not necessarily so for works of technological or digital art, whose relationships with their container vary. A few examples will suffice to illustrate how the distinction among the container, the content, and the context are articulated. Let’s take Nam June Paik’s Zen for TV (1963): the content was originally the capture and modification of Hertzian waves by the TV set, tampered with using an magnet coil so that a line appears on the screen. Should the container, a TV set from the early 1960s, be preserved as is? On the day when it ceases to work, is it acceptable to preserve its appearance while the line is generated through special effects? If the line is not the result of capture of a signal, a wave, is it the same content? Here, a contextual element helps us to decide: we know that, in his lifetime, Paik remade his old works and did not hesitate to use more up-to-date technologies, indicating that for him conceptual aspects were more important than the technical or physical production of the object. But what about Gary Hill’s work Inasmuch As It Is Always Already Taking Place (1990), in which the images are placed on a videographic medium the longevity of which, with a bit of care, may be assured, and the container is made of disconnected cathode-ray tubes?

These tubes are visible and essential to the work, which establishes a sort of relationship between the human body (which we see on the screens in various sizes) and the body of the image (here, the tubes and the wires that feed them). Thus, we may imagine in the future a situation in which an artisan of the electronic era may make such tubes by hand. In the interval, one strategy might be to stock up on tubes with a view to replacing or repairing the existing ones. But such a situation would not be, in the very long term, a guarantee of perpetuity. So, we would need to know what the artist thinks.

In the case of the recent works by Jim Campbell, such as Church on 5th Street (2001), the content is composed of very-low-definition digitized video images stored in the memory of a microprocessor, and the images appear on a screen of light-emitting diodes. How can we envisage the adequate long-term conservation of such a work? The content – the images – are video images laid into the memory of an electronic circuit and broadcast on an LED grid that reproduces them at very low definition. The container – the electronic microprocessor – will no doubt be duplicated, although here one would no doubt ask the artist, who makes his own circuit boards, to contribute. Should he supply the technical documentation? Should he supply the source images (images shot with a late-model video camera)? As we can easily see, each case may pose a number of problems, but in most cases it is the artist who holds part of the answer. As long as the artist is living and available, he is part of the context, but once the artist dies, the documentation often becomes the privileged source for determining the content of the work and its degree of variability. In the end, can it be envisaged that the works are also mortal?
Translated by Käthe Roth

Jean Gagnon is an art curator and critic. Recognized as a specialist in video art in the 1980s, he is most interested in the intersection of art and new technologies. Since 2008, he has been the director of SBC Gallery in Montreal. From 1998 to 2008, he was the director of the Daniel Langlois Foundation for Art, Science and Technology. From 1991 to 1998, he was curator of new media at the National Gallery of Canada.

This text is reproduced with the author’s permission. © Jean Gagnon 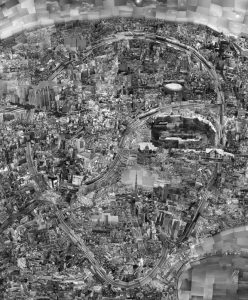 December 18, 2018 [originally published in CV98 in Fall 2014] — Karen Irvine, curator and museum associate director at the Museum of Contemporary Photography in Chicago, recounted that it was after seeing Sohei Nishino’s work in Korea in 2010 and reading Rebecca Solnit that she had the idea for the Of Walking exhibition. Nishino is one of eight international contemporary artists whose works were in the show… 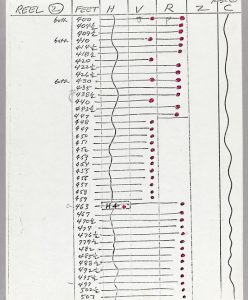 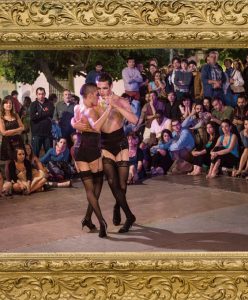