Bringing to the walls and façades of cities the oversized faces of their inhabitants, reappropriating the urban space to advertise a presence and affirm an identity – these are the concerns that lie at the heart of the projects that we present in this issue. As a collaborative tool, photography becomes the instrument of a public statement!

JR is a French artist who describes himself as an “artivist.” His series of monumental posters, related to current political hot spots, have made headlines in major international newspapers and magazines. That’s no surprise: his portraits, made cooperatively with the communities concerned, play on irony or on calm affirmation to show what is not – or cannot – be seen about situations such as young people in the burning French suburbs, women in the Third World, or, as shown here, old age. His monumental posters are found in places or on surfaces that are improbable: the “fence” built by Israel, chic Parisian neighbourhoods, favela walls, tops of train cars, and, in the project shown here, on the walls of old houses in Shanghai dwarfed by skyscrapers. Whence the huge reaction that JR provokes, and whence the relevance of presenting his work to the public in Canada for the first time.

Such “intervention art” is contrasted against a photographic project that forms the image of a public institution deeply rooted in its mandate. The Face of the African Diaspora, a monumental mural visible from the street, composed of some two thousand images received from all corners of the world, also gives a concrete overview of this diaspora, to which the Museum of the African Diaspora rightly wants to give visibility and identity. The fact that the matrix image, a simple portrait of a Ghanaian girl, was made by a photographer, Chester Higgins Jr., who devoted most of his work to representing the diaspora, intensifies the collaborative and community dimension of this project. The mural may not be a work of art in the traditional sense of the term, but it certainly brings new scope to the presence of the photographic image in the public space.

Such concerns also have their representatives in Quebec, in the collaborative and community projects produced by Miki Gingras and Patrick Dionne over the last ten or fifteen years. Anchored both in the realities of Latin American communities and in those of low-income neighbourhoods in Montreal, the duo’s approach is based on a desire to transmit the knowhow that will enable people to make and communicate their own self-images. In this approach, the pinhole camera conveys the elementary magic of photography, and the images that result from the basic training that Gingras and Dionne dispense then become part of a process of public affirmation through display in the community’s common areas.

Taken together, these works show that use of the photographic image in the public space may arise from a logic other than commercial demands and that, in spaces that are open to all, art can be more than imagined at first glance – an issue that we previously highlighted in our issue on public art (CV82). Translated by Käthe Röth 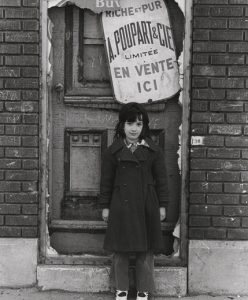 May 12, 2020 [originally published in CV105 in Winter 2017] — Over the years, Montreal has been the subject of a number of major documentary projects. We might think of Gabor Szilasi’s prolific production – in particular, as he recorded development in the city, his photographs of St. Catherine Street (1977–79) in which he immortalized the configuration of the stores along the street… 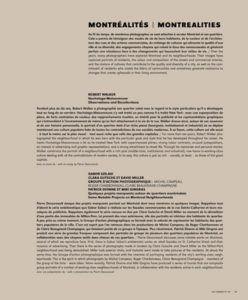 [Winter 2017] Over the years, many photographers have explored Montreal and its neighbourhoods. Their images have captured portraits of residents, the colour and composition of the streets and commercial arteries, and the mixture of cultures that contribute to the quality and diversity of a city, as well as the commitment of residents who create the […] 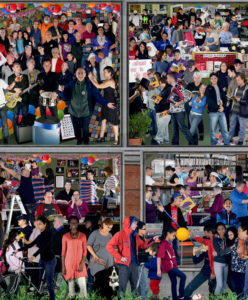 March 21, 2018 [originally published in CV94 in Spring 2013] — Far from fitting the image of picture chasers and big-time reporters, Patrick Dionne and Miki Gingras seem, rather, to present themselves as pedagogues of photography, as their projects are intended both to document the contemporary world and to teach the rudiments of photography…