I found out about the Virtually There project in 2009 during a brief visit to the Gushul Studio, which offers a residency program run by the University of Lethbridge in Alberta. At the time, Andreas Rutkauskas was staying there and preparing to make another of his outings in the mountains. The Gushul Studio is located in the small town of Blairmore, in the Crowsnest Pass area of the Rocky Mountains in the southwest part of Alberta. This improbable landscape, resulting from the collision of the Continental and Oceanic tectonic plates and shaped by the elements, is an almost irresistible draw to hikers. It was in this area, as well as among the peaks near the Banff Centre, that Rutkauskas undertook a series of off-trail excursions the itinerary of which had been meticulously planned a few weeks earlier, in his Montreal apartment.

Rutkauskas had already hiked many times in the Canadian Rockies, as well as in the Appalachian White and Green mountain ranges along the border between Canada and the United States1 and in other areas, in order to capture the encounter between nature and culture with his large-format camera.2 To a point, his work evokes landscape photography,3 which he updates through his reflection on questions about representation and about the now-omnipresent technologies that act as mediators of reality. This reflection, which he developed as he walked – armed with his GPS – is articulated through a range of strategies, such as notebooks, route plans, and topographic maps, but also blogs, videos, digital imagery, and photography. His practice highlights the performative dimension inherent to the fieldwork that landscape photography requires – it is expressed in gps altitude, time, and distance data accumulated in the notebook View From Mount Temple, which is included in Virtually There, as well as in the drawings in the form of route plans that denote the itineraries that he took and the cadence of his step. Elsewhere, in the video Walk the Line (2011) presented as part of the Stanstead Project, the artist can be seen distancing himself from the camera, heading for the horizon. This manifestation of fieldwork in the project gives a glimpse of a methodology inspired by a discipline resembling that of geography. Walking, which is at the heart of the exploration process, refers us back to the mobile nature of the experience of the climber, who sees geographic changes corresponding to different altitudes. Here, the work, in addition to cataloguing this movement, examines its virtual counterpart. In effect, by juxtaposing the high-angle view of the mountain climber who has reached the mountain peak against the reconstructed satellite image, Virtually There records a gap in the means used, but also in the range of renderings that these means are able to offer.

Virtually There is composed of elements that transmit the artist’s experience of contemplation as he scaled high peaks and of his interaction with the Google Earth satellite imagery and aerial photography software.4 Following research conducted using topographic maps, archival documents, and gps routes previously used by other climbers and drawn from different books,5 Rutkauskas isolated longitudinal and latitudinal coordinates, determining a certain number of hikes that he virtually executed by via Google Earth. It was during these online expeditions that images constructed by the software from recorded altitude data were selected. Two video works are based on these virtual environments: the first, Summit Circles, shows high-angle views of seven peaks that Rutkauskas climbed; the second, Caché, deconstructs the operation of the imaging software by erasing from the memory cache, piece by piece, the data previously transmitted. Thus stripped of all information, the 3D reconstructions are transformed from complex assemblages to simple geometric diagrams.

The virtual hikes done in Google Earth formed the point of departure for the work that subsequently took shape in the field: Rutkauskas executed the planned hikes and reproduced on film points of view corresponding to those taken by Google Earth. “One might say that [Rutkauskas] prepared a sort of horizon-in-waiting; he precomposed his views to come, preshaping and conditioning the in situ experience.”6 The titles of the photographs resulting from these excursions deep into the Rockies are the gps coordinates that indicate the exact site where the picture was taken. Conversely, the digital images are identified by the longitude and latitude of the artist’s apartment in Montreal. This bringing together of images produced during hikes, some virtual and some very real, determines the essence of the project, which approximates our experience of the world today – armed as we are with high-performance technological devices. The process set up by Rutkauskas short-circuits the unpredictable nature of contextual practices by anticipating the shots to be photographed. And yet, this juxtaposition reveals the limitations of synthetic imagery and the gap between it and a place in real time. The electronic portrayal proves to be approximate and refers to the artist’s subjective interpretation of the landscape. Furthermore, as art theoretician Miwon Kwon explains, in recent in situ7 approaches, the site can no longer be considered a given condition; rather, it is generated by the work itself and then placed in relation with certain discursive elements.8 Thus, Virtually There participates in current discourses on the growing importance of geolocation technologies in our lives, on the nature of the information that they able to transmit to us on certain sites, and, by extension, on their economic and political stakes. Whether it takes a position or not, Rutkauskas’s work is inscribed within this discursive context; in this sense, it opens a window on questions linked to representation and conquest of the world.

Virtually There makes visible the subjectivity of the aesthetic experience and of our experience of the world. Although the geolocation devices now at our disposal facilitate travel, they offer only the illusion that we can better know a territory by looking at it from above. According to sociologist Bruno Latour, the claimed panoptic of Google Earth is based on a false continuity of the whole with the parts – its zoom function leads us to believe in this continuity, even though it links some points of view to others that are in essence in­commensurable.9 On the contrary, Latour calls certain experiences attached to real space (such as that of the walker) oligoptic10 – “narrow windows that make it possible to create links, through several narrow conduits, with just a few aspects of the beings (human and non-human) that together comprise the city [or any other environment characterized by some complexity].”11 Oligoptics constitute positions allowing for the subjective and limited apprehension of things. In this sense, Virtually There, in its intrinsic organization, bears witness to the fractured and constructed nature of all views of the world. By multiplying interpretations, the artist builds a portrait that can’t help but convey the impossibility of describing continuously the experience of a place. This tension is at the heart of the work, the title of which may also evoke the state that we are perpetually faced with in relation with the world.
Translated by Käthe Roth

1 For the contextual exhibition “Stanstead Project, or How to Cross the Border,” Rutkauskas explored the border area around the town of Stanstead, situated in the Eastern Townships of Quebec.
2 The Virtual Hiker blog that Rutkauskas has produced since 2009 features numerous images, many of them annotated, taken during his excursions (virtualhiker.wordpress.com).
3 For example, the pictures taken by William Bell and Timothy O’Sullivan, who joined the u.s. government’s Western American Survey. See J. Snyder (ed.), One/Many: Western American Survey Photographs by Bell and O’Sullivan (Chicago: University of Chicago Press, 2006).
4 “Google Earth is a software package, owned by Google, that allows Earth to be viewed with an assemblage of aerial or satellite photographs. . . . The Google Earth software also contains topographic data gathered by nasa during the srtm mission, which allows the surface of Earth to be viewed in 3D” (www. wikipedia. org, consulted 1 July 2012; our translation). The software works through an Internet connection or the memory on a computer’s hard disk. Therefore, it is possible to use Google Earth offline, using cached data (www.support.google.com/ earth, consulted 1 July 2012).
5 Rutkauskas based his work, among others, on certain Web sites and books that present off-track routes in the Rockies, such as The Road Not Taken of Robert Frost and Scrambles in the Rockies of Alan Kane.
6 S. Campeau, “Andreas Rutkauskas: Une aura intemporelle,” etc, 92 (2011): 51 (our translation).
7 Kwon advocates use of the expression “site-oriented practices.” See M. Kwon, One Place after Another: Site-specific Art and Locational Identity (Cambridge: mit Press, 2004).
8 Kwon, One Place, p. 26.
9 B. Latour, “Paris, ville invisible: le plasma,” in C. Marcel, D. Birnbaum, and V. Guillaume (eds.), Airs de Paris, 30 ans du Centre Pompidou (Paris: adgp, 2007), pp. 260–63.
10 Latour uses the neologism oligoptic in contrast to panoptic, which is derived from Bentham’s Panopticon, a building for surveillance of prisoners within which the movements of each can be seen at any time from a surveillance tour without the observer being seen. The concept of panoptic, which has been theorized by Foucault, among others, evokes the existence of a gaze that embraces everything (M. Foucault, Surveiller et punir [Paris: Gallimard, (1975) 2010.])
11 Latour, “Paris” (our translation).

Andreas Rutkauskas completed a BFA at the University of Manitoba and an MFA at Concordia University in Montreal, where he now teaches photography in the Studio Arts department. His practice is broadly concerned with the historical and political landscape in response to shifting technologies. Recent shows include Projet Stanstead at the Foreman Art Gallery in Lennoxville, Quebec, and a duo exhibition at TRUCK Contemporary Art in Calgary, Alberta. He will present a new project focusing on the world’s longest-producing oil field in an upcoming solo exhibition at Sporobole in Sherbrooke. www.andreasrutkauskas.com

Geneviève Chevalier is an artist, independent curator, and doctoral student in arts studies and practices at UQAM. Her field of interest covers exhibition, contextual methodologies, and the question of public spheres.

This text is reproduced with the author’s permission. © Geneviève Chevalier 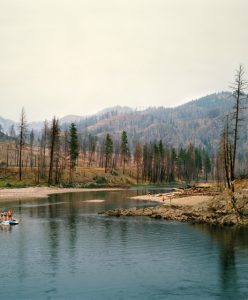 [Winter 2020] This article was originally published only in French. You can read it by switching over to the French version of this page. Galerie La Castiglione, Montréal Du 28 août au 28 septembre 2019 Par Christian Roy (French only) [See the printed or digital version of the magazine for the complete article. On sale […] 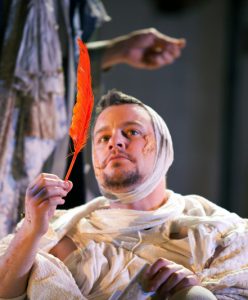 May 21, 2019 [originally published in CV100 in Spring 2015] — From the opening credits, the title of The Persecution and Assassination of Jean-Paul Marat as Performed by the Inmates of the Asylum of Charenton under the Direction of the Marquis de Sade as Performed by the Prague-based Experimental Theatre Company Akanda for the Patients and Staff of the Bohnice Psychiatric Hospital announces the work’s device….

[Spring-Summer 2018] This article was originally published only in French. You can read it by switching over to the French version of this page. Cinémathèque québécoise, Montréal Du 29 août au 29 octobre 2017 By Geneviève Chevalier (French only) [See the printed or digital version of the magazine for the complete article. On sale here […]