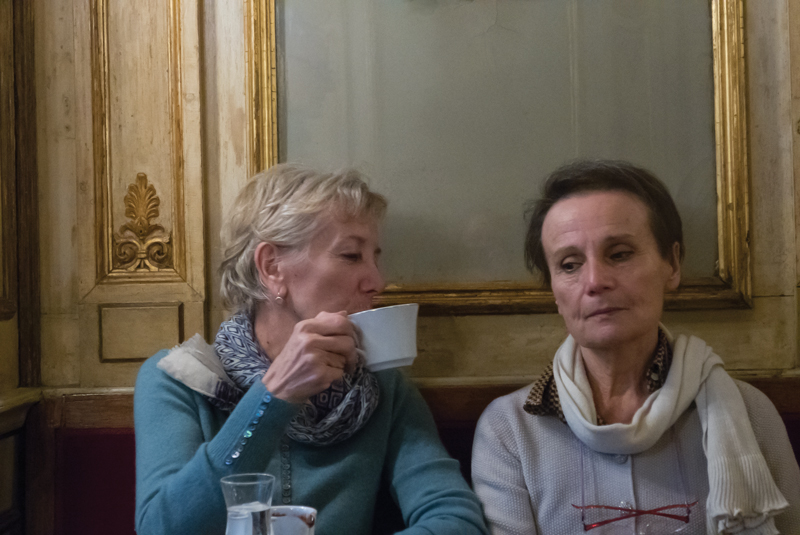 This portrait of two women, taken in the famous Caffè Florian in Venice, was one of those rare occasions when I asked somebody if I could take their photograph. To my surprise the two women agreed immediately. They trusted me without hesitation. They did not even ask what I wanted their photograph for, so deeply were they in their own world.

They obviously were content and at ease in their environment—in their moment. I had been observing them, sitting right across, and as so often I wanted to take their photograph capturing this very moment, as I delved into their history I did not know, the exchange I was not privy to, and a community of women I did, however, feel part of.

For me, this is not only a portrait of two women, it is also an image of the possibility of human connection, an unguarded moment, without beginning or end, captured by and despite the presence of the camera in a flow of many such connections—unknowable as to its true meaning.

Although I have been collecting art photography for many years including works by Angela Grauerholz and Pascal Grandmaison. I received a new and interesting perspective working with both in the Artgeist Program. Both Angela and Pascal knew my collection, understood my viewpoint and each created new works that look wonderful on my walls and which I enjoy daily.

For me both works succeed completely; they are individually beautiful to the eye, aesthetically, and both give a sense of narrative and mystery as to what is involved with the people in the images. This fulfills for me the emotional content that I always look for.