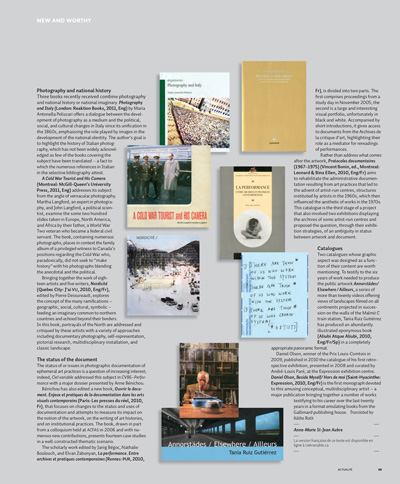 Photography and national history
Three books recently received combine photography and national history or national imaginary. Photography and Italy (London: Reaktion Books, 2011, Eng) by Maria Antonella Pelizzari offers a dialogue between the devel- opment of photography as a medium and the political, social, and cultural changes in Italy since its unification in the 1860s, emphasizing the role played by images in the development of the national identity. The author’s goal is to highlight the history of Italian photography, which has not been widely acknowledged as few of the books covering the subject have been translated a fact to which the numerous references in Italian in the selective bibliography attest.

A Cold War Tourist and His Camera (Montreal: McGill-Queen’s University Press, 2011, Eng) addresses its subject from the angle of vernacular photography. Martha Langford, an expert in photography, and John Langford, a political scien- tist, examine the some two hundred slides taken in Europe, North America, and Africa by their father, a World War Two veteran who became a federal civil servant. The book, containing numerous photographs, places in context the family album of a privileged witness to Canada’s positions regarding the Cold War who, paradoxically, did not seek to “make history” with his photographs blending the anecdotal and the political.

Bringing together the work of eigh- teen artists and five writers, Nordicité (Quebec City: J’ai VU, 2010, Eng/Fr), edited by Pierre Dessureault, explores the concept of the many ramifications geographic, social, cultural, symbolic feeding an imaginary common to northern countries and echoed beyond their borders. In this book, portrayals of the North are addressed and critiqued by these artists with a variety of approaches including documentary photography, self-representation, pictorial research, multidisciplinary installation, and classic landscape.

The status of the document
The status of or issues in photographic documentation of ephemeral art practices is a question of increasing interest; indeed, Ciel variable addressed this subject in CV86–Performance with a major dossier presented by Anne Bénichou.

Bénichou has also edited a new book, Ouvrir le document. Enjeux et pratiques de la documentation dans les arts visuels contemporains (Paris: Les presses du réel, 2010, Fr), that focuses on changes to the status and uses of documentation and attempts to measure its impact on the notion of the artwork, on the writing of art histories, and on institutional practices. The book, drawn in part from a colloquium held at ACFAS in 2006 and with numerous new contributions, presents fourteen case studies in a well-constructed thematic scenario.

The scholarly work edited by Janig Bégoc, Nathalie Boulouch, and Elvan Zabunyan, La performance. Entre archives et pratiques contemporaines (Rennes: PUR, 2010, Fr), is divided into two parts. The first comprises proceedings from a study day in November 2005; the second is a large and interesting visual portfolio, unfortunately in black and white. Accompanied by short introductions, it gives access to documents from the Archives de la critique d’art, highlighting their role as a mediator for rereadings of performances.

Rather than address what comes after the artwork, Protocoles documentaires (1967–1975) (Vincent Bonin, ed., Montreal: Leonard & Bina Ellen, 2010, Eng/Fr) aims to rehabilitate the administrative documen- tation resulting from art practices that led to the advent of artist-run centres, structures instituted by artists in the 1960s, which then influenced the aesthetic of works in the 1970s. This catalogue is the third stage of a project that also involved two exhibitions displaying the archives of some artist-run centres and proposed the question, through their exhibi- tion strategies, of an ambiguity in status between artwork and document.

Catalogues
Two catalogues whose graphic aspect was designed as a func- tion of their content are worth mentioning. To testify to the six years of work needed to produce the public artwork Annorstädes/ Elsewhere / Ailleurs, a series of more than twenty videos offering views of landscapes filmed on all continents projected in succession on the walls of the Malmö C train station, Tania Ruiz Gutiérrez has produced an abundantly illustrated eponymous book (Aliubi Atque Aliubi, 2010, Eng/Fr/Sp) in a completely appropriate panoramic format.

Daniel Olson, winner of the Prix Louis-Comtois in 2009, published in 2010 the catalogue of his first retro- spective exhibition, presented in 2008 and curated by André-Louis Paré, at the Expression exhibition centre. Daniel Olson, Beside Myself/ Hors de moi (Saint-Hyacinthe: Expression, 2010, Eng/Fr) is the first monograph devoted to this amusing conceptual, multidisciplinary artist a major publication bringing together a number of works testifying to his career over the last twenty years in a format emulating books from the Gallimardpublishinghouse. Translated by Käthe Roth