“Certain images still have the ability to feed our imagination with something other than consumerist desires!” proclaims Valérie Jouve, previous recipient of the Prix Niépce. Charlotte Abramow, whose Instagram account boasts 200,000 followers, declares, “Images are an inventive torchlight that is shone on a subject.” Yael Burstein says that she’s “enchanted by [photography’s] magical capacity to absorb the viewer,” and Joana Choumali, recipient of the Prix Pictet in 2019, likes “the idea of pushing the limits of this discipline and using different techniques.” They are among the thirty or so women photographers, including Quebecer Jocelyne Alloucherie, to have their say on the Elles x Paris Photo website. For five months now, and until its next edition in November (if everything goes well), the Paris fair has kept itself on the radar with this “circuit dedicated to women photographers” (and the galleries that represent them), with a wealth of images and words.

What’s different about a woman’s gaze in photography? “To see things through a gender prism goes against what we believe in,” answers Jouve. “Besides, what is a ‘woman’s gaze’? Nevertheless, women photographers generally sell less than men, and aren’t shown as much.” “To recognize such a gaze is to reduce individual gazes to a gender category, which makes no sense,” comments Anna Malagrida. “But I would rather see the words – female and male – as two opposites, creating a space between them that is not empty, but made of subtleties.” 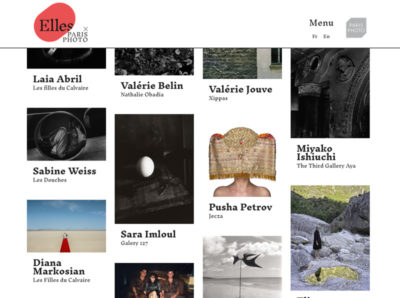