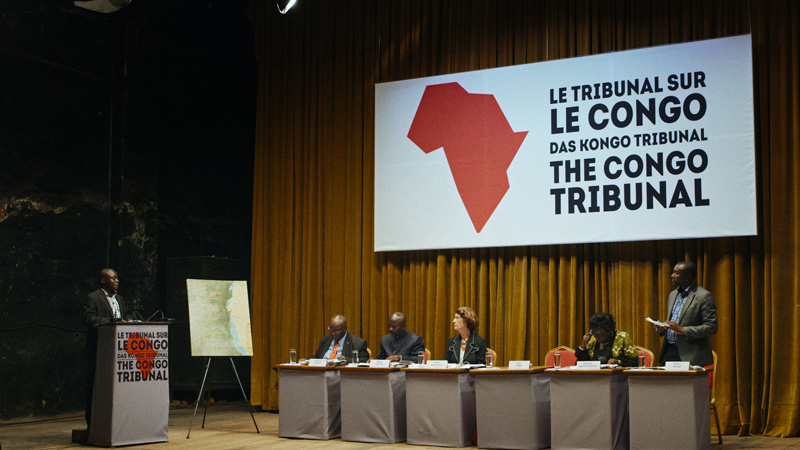 [Excerpt]
The Congo Tribunal, documentary ﬁlm by Milo Rau, a German–Swiss co-production (2017), was presented as part of the exhibition L’imaginaire radical: le contrat social at VOX September 13 to December 15, 2018.

The International Institute of Political Murder was created in 2007 by Swiss director, artist, and ﬁlmmaker Milo Rau. Since then, Rau has produced more than ﬁfty plays, ﬁlms, performances, and video installations on social and political realities, most of them complex and controversial. Among his topics have been the execu-tion of the Romanian dictator Nicolae Ceausescu and his wife Elena, the Rwandan genocide, the Utøya massacre perpetrated by Norwegian Anders Breivik, the affair of the Belgian pedophile Marc Dutroux, the homophobic murder of a young Belgian man, the Moscow trial of Pussy Riot, and the fate of migrants in Europe. Rau’s work is based on a transdisciplinary and collective approach based on in-depth research. For each of his projects, he elicits the participation and commitment of the parties concerned; his approach, rooted in tangible situations, takes them on a reﬂective journey that culminates in a reality richly elucidated by the multiple points of view to which the performance gives shape.

“If I had to choose only one of my theatre or ﬁlm projects, it would be ‘The Congo Tribunal,’” said Rau. “The ﬁlm gathered all my interests and formats which have driven me over the last ﬁfteen years. It is a theatrical tribunal, but everything is real: miners, rebels, the cynical minister and the lawyer from Den Hague – they play nothing other than themselves. At the same time, the ﬁlm creates something that is actually not documentarily realizable: A portrait of the world economy, a very concrete analysis of all causes and backgrounds that lead to a civil war in Congo that did not stop for more than twenty years. And who is interested in the fact, that this situation remains. This tribunal of opinion, with no legal value but with considerable symbolic weight, modelled on the tribunal instituted by Bertrand Russell and Jean-Paul Sartre in 1966 to de-nounce the American intervention in Vietnam, was held in May and June 2015 in Berlin and in Bukavu, Democratic Republic of the Congo, and was chaired by Jean-Louis Gilissen, a lawyer at the International Criminal Court in The Hague. During the six days of hearings, sixty witnesses and experts, representing all parties concerned, were heard. More than a thousand people attended the sessions…
Translated by Käthe Roth