For ten years, the Humanitarian Visa d’or Award has been highlighting photography in the context of armed conflict. To underline this first decade of the competition, which it runs with the Visa Pour l’Image photojournalism festival, the International Committee of the Red Cross has put online a “retrospective” featuring photographs and statements by the winners, including Italian photographer Alfredo Bosco, the 2020 winner for his series shot in the Mexican state of Guerrero.

Launched during the Arab Spring period (the report in Yemen by Catalina Martin-Chico won the first year’s award), the ICRC’s Humanitarian Visa d’or Award measures how violence endures or brings out subjects that receive less media attention. Three series have come from Syria (2012, 2013, 2019), the most recent one produced by Abdulmonam Eassa, a reminder of the primordial role of local populations in the documentation of war. Although some images are painful to look at, they are essential, their makers say, to nourish the collective memory. “The award is a victory not for me, but for the victims,” notes Angela Ponce Romero, 2017 winner for her work with survivors of the conflict in Peru in the 1980s and 1990s between the Shining Path group and the government army.

The Humanitarian Visa d’or Award first focused on the theme of medical work as bullets fly, and then the role of women. Since 2018, the award has focused on urban warfare. The 2021 competition is open until June. 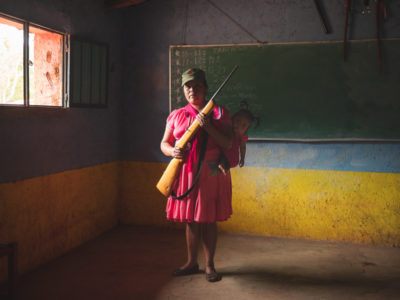