The dozen images don’t cover a year of the pandemic, but they convey its tone amply: beyond the tragedies and the fears, life finds a way to continue. Upon invitation from the McCord Museum, photographer Michel Huneault threw himself into the fray, as they say. Yes, he had access to intensive care wards, witnessed a “last breath,” a last caress. But he also captured scenes of serenity (a mother and her child) and even of triumph – a ninety-five-year old woman, recovered, on her feet. Made during the early months of the health crisis, his reporting is punctuated with almost ephemeral episodes. Had you forgotten the lines of shopping carts in front of a supermarket? And the emergency call put out to the armed forces? And the compliance with social distancing in parks? Put on line in March, the series Documenting the Early Days of the Pandemic in Montreal is a reminder of both what there is to fear and what there is to hope for. 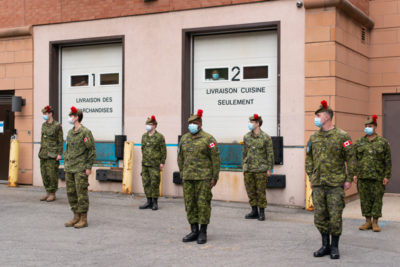