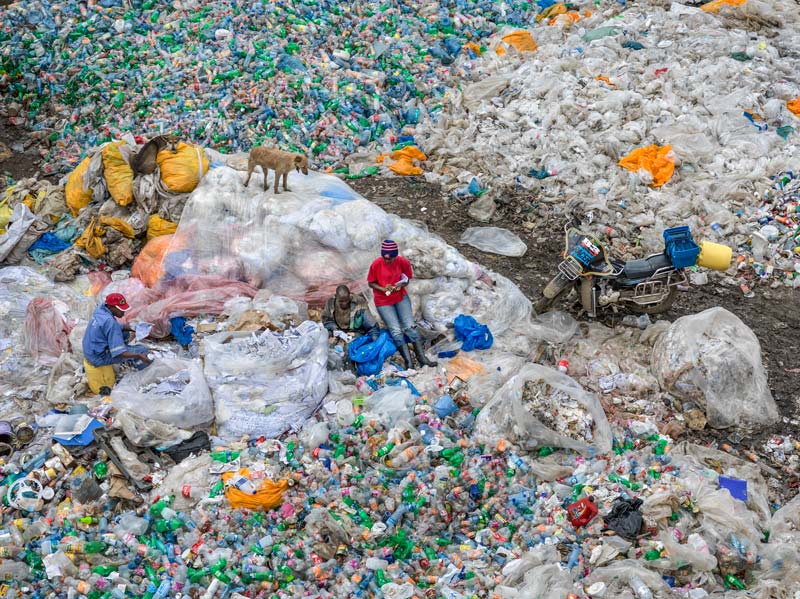 [Excerpt]
From the start it seems taken for granted: Edward Burtynsky’s Anthropocene at the National Gallery of Canada will be technophilic.1 At every opportunity. Even as stratigraphers are still discussing the contours of this geological epoch attributed to human activity, still bitterly arguing over the relevance of the very word “anthropocene” – as opposed to “capitalocene” or “plantationocene”2 – no debate stirs the exhibition spaces, which are dominated by outsized images and cinemascope projections that offer an unequivocal vision of the problem. Yet, the Anthropocene is not totally self-evident. Although the term ﬁrst appeared in the pages of the venerable journal Nature in 20023, scientiﬁc consensus has not yet been reached. Still under discussion is the chronology of our era even as the markers conﬁrming humans as a geological and atmospheric agent charged in the affair are being reﬁned. Although the human presence on Earth has always had some effect – a consequence inherent to any biological agent – it is the ﬁrst time that it has been regarded as being as powerful as a meteorite, capable of modifying Earth’s climate and structure in one fell swoop. We can presume that humanity did not do this intentionally – not early on, at least, as it is acting more and more like an irresponsible teenager, counting on its Earth-Mother to absorb the damage. The planet is resilient but, at this point, there’s no getting away from the fact that it can no longer compensate for all our mistakes.

Burtynsky has a perfect understanding of the power of the “Anthropocene”4 label; he has used it as a proven recipe for twin exhibitions, in Ottawa and Toronto, backed up by an eponymous ﬁlm, which premièred with great pomp at the Toronto International Film Festival in September 2018. The ﬁlm won the 2018 Rogers Award for Best Canadian Film (which Burtynsky received with Jennifer Baichwal and Nicholas de Pensier, with whom he has been working since his ﬁrst ﬁlm, Manufactured Landscapes, produced in 2006). Highlighting the same stylistic principles under this new rubric, Anthropocene: The Human Epoch is brimming with impressive aerial views showing the monstrous, systematic extractivism that is eating away at Earth’s crust at various locations around the globe, emphatically displaying traces of the mining industry’s abuses all over the world. For anyone who saw the ﬁlm before visiting the exhibition, the latter proves redundant, a sort of freeze-frame on certain scenes, exaggeratedly enlarged – the biggest up to seven metres wide. Shown, in turn, are urban landscapes of the sprawling city of Lagos, a marble quarry at Carrara, clearcutting in the Borneo rainforest, and too many projections excerpted from the ﬁlm itself…
Translated by Käthe Roth

1 The Anthropocene exhibition was held simultaneously at the Art Gallery of Ontario (Toronto) from September 28, 2018 to January 6, 2019 and at the National Gallery of Canada (Ottawa) until February 24, 2019. It is presented at the Fondazione MAST in Bologna (Italy) from May 15 to September 22, 2019.
2 This concept was devised by Anna Lowenhaupt Tsing and taken up by Donna Haraway, who places the beginning of the current geological era in the sixteenth century with the establishment of sugar-cane plantations. See Anna Lowenhaupt Tsing, “A Feminist Approach to the Anthropocene,” public lecture, Barnard College, November 10, 2015; Donna Haraway, “Anthropocene, Capitalocene, Plantationocene, Chthulucene: Making Kin,” Environmental Humanities 6 (2015): 159–65.
3 Paul J. Crutzen, “Geology of Mankind,” Nature 415 (2002): 23, http://dx.doi.org/10.1038/415023a.
4 “What makes the Anthropocene an excellent marker, a ‘golden spike’ clearly detectable beyond the frontier of stratigraphy, is that the name of this geohistorical period may become the most pertinent philosophical, religious, anthropological, and . . . political concept for beginning to turn away for good from the notions of ‘Modern’ and ‘modernity,’” said Bruno Latour in his lecture “The Anthropocene and the Destruction of the Image of the Globe,” in Facing Gaia: Eight Lectures on the New Climatic Regime, trans. Catherine Porter (Cambridge, UK: Polity Press, 2017).