The monumental ceiling, full of detail and appearing circular (is this a photographic effect?), overwhelms its glassed-in – and, it should be mentioned empty – space. It towers, barely held up by its single base: two walls and a column. This is the architectural work. The title labels it a “coffee shop” – certainly an outdoor coffee shop, cynics would say, given the grass growing everywhere. This photograph and the rest in the series on architectural ruins earned French photographer Jonk the “overall winner” award at Earth Photo 2020. Nature returns to its rightful place … Like the tree that hides the forest, the attractive ruin throws shadow on a bigger problem. In this case, it is the fate of Abkhazia, an autonomous region in Georgia wrecked by war, and then by general indifference. Does the collapse of an ideal (political or architectural) foretell the collapse of the planet? Jonk’s winning series, which also includes images taken in Portugal and Italy, ring out as a warning. 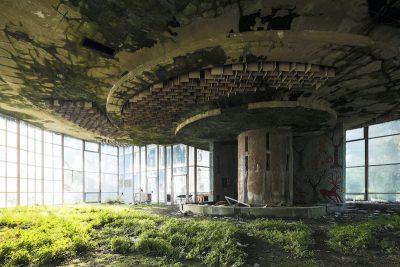