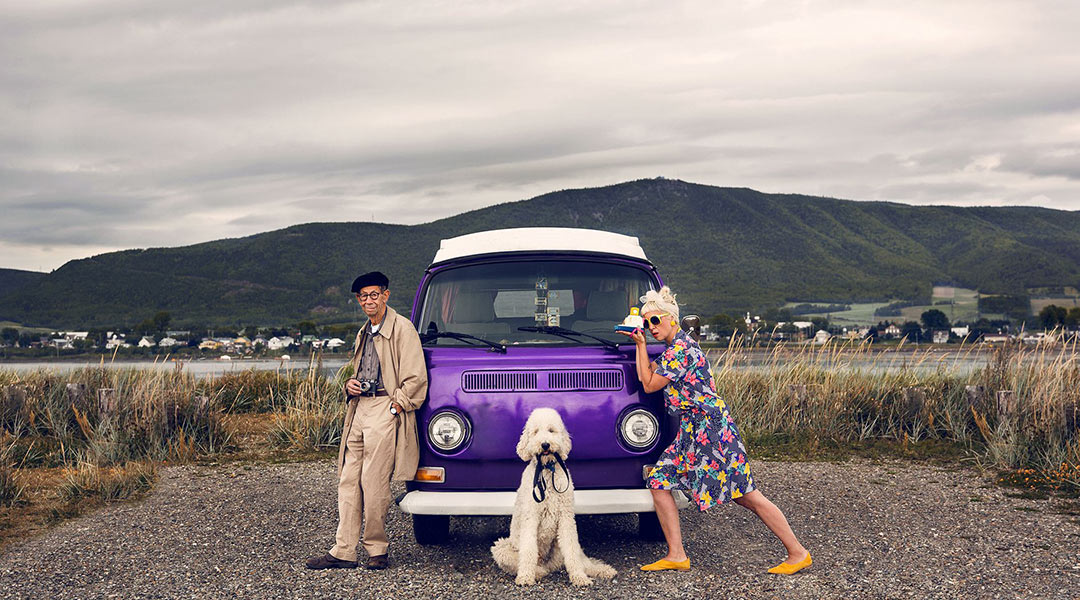 Gabor
In Theaters May 27

Surely, photographer Gabor Szilasi needs no introduction! He has worked in every genre, in addition to teaching and being involved in the community. He has made a huge and warm mark, and his images still have the power to move us. Although we know much about his life from David Harris’s book The Eloquence of the Everyday (2009), the documentary film Gabor (2021) gives us a sense of his unique personality, both welcoming and elusive. The tone of Gabor is light but reveals Szilasi’s sincere engagement. Director Joannie Lafrenière draws on the flashy aesthetic, optimistic colours, and thundering pace from North American visual pop culture, providing a background against which Szilasi’s calm, meaningful silences and subtle intelligence can stand out.

This counterpoint is woven through the film, which proceeds by concentric circles rather than chronologically: memory is a space to explore. Szilasi is approached first on the surface (literally: in one of the first scenes, he visits his hairdresser) and follows his footsteps in the Charlevoix region, in his darkroom, during exhibitions, with his friends and family. We end up in a subway car in Budapest, Hungary, where he was a labourer for a brief time. And so, he patiently relates his flight from the country, and what he lost along the way. But the circles are not perfectly concentric: Szilasi’s irony and humour easily bubble to the surface when he asks Lafrenière if his performance is up to scratch.

Nothing, in the documentary sense of the word, happens in Gabor – no tragedy, no intrigue – except for the story of the donation of his archives to Library and Archives Canada. Everything happens in and through images: from a photograph we transition to a reproduction in a book, which is then held up to the very place where the picture was taken, which is photographed again through a cell phone, which we see on the screen, and so on. When the film was shown at the Rencontres internationales du documentaire de Montréal in 2021, Lafrenière underlined the work of editor Emmanuelle Lane, whose work is exemplary. Not only does the editing take us through images that are complexly mise en abyme, but the choice of shots also allows for countless underlying connections to be made. Here’s one: Szilasi’s daughter Andrea tells how one day she arrived in her father’s office, her heart broken from a recent romance. Letting her talk, Szilasi simply asked her to move toward the window: rather than dispense fatherly advice, he photographed her. In a mirroring scene, as the truck loaded with boxes for the national archives leaves, we see Szilasi watching his documents rolling away as his daughter takes his picture.

The film avoids complacency, even though both its subject and its point of view are sympathetic. For Andrea Szilasi, the boxes do not simply represent a life’s work. They contain a part of the family album that is closing, a memory that is rolling away.

Michel Hardy-Vallée is a historian of photography and Visiting Scholar at the Gail and Stephen A. Jarislowsky Institute for Studies in Canadian Art, Concordia University. His research is concerned with the photobook, visual narration, interdisciplinary practices, and the archive, in the con- texts of Quebec and Canada. He has published his work in History of Photography and through a number of edited collections and conference papers. He is currently working on a monograph about Montreal photographer John Max (1936–2011).